The W4W – Growing Together campaign team is a volunteer group made up of IWA Modena volunteers. Their purpose is to raise awareness and funds for the Association for the Integration of Women (AIW), our partner for 2021. The team organised two Modena City Tours, exclusively for our IWAM members, family and friends. They are in collaboration with Modenatur and the local tourist guide association, Associazione Arianna APS. 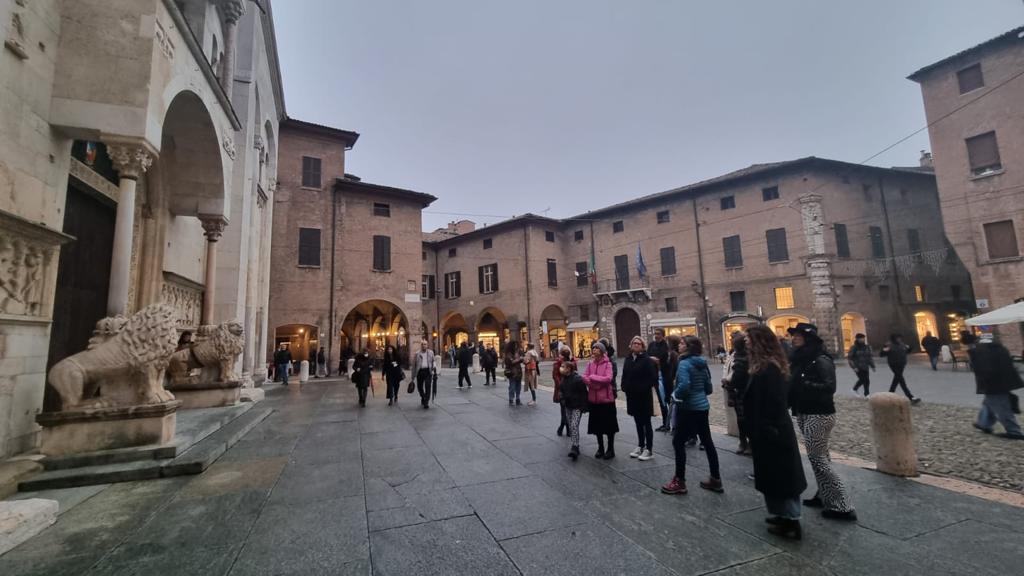 The first tour took place on 13th November, focusing on telling the story of Modena’s history. There were about 20 of us who met in Piazza Grande, with Francesca Soffici from ModenaTur and one her guides, Stefania. She took us on a relaxing stroll through the old city centre. We learned about the main events in the history of Modena and visited the cathedral ‘Duomo’, which is a Unesco World Heritage site. At the end of the tour, we had the opportunity to visit and climb up the ‘Ghirlandina’ (civic tower).

Only a few of us were brave enough to climb the 200 steps to the top of the Ghirlandina. Climbing the tower of a city feels like conquering it. It definitely felt that way for me anyway! The view from the top would have been spectacular if it wasn’t for the Modenese fog. It happened to be one of the coldest evenings of the year, with the typical Modenese fog coming down on us rapidly. But with Stefania’s guidance and knowledge, she cheered us up and loaded us up with interesting facts about the city’s sites and history.

Keep your calendars free for the next tour which will take place on 22nd January 2022. This tour will concentrate on the famous women of Modena. Just to give you a sneak peek into what we’ll be finding out… did you know that there was a Modenese Queen of England?